This is not the first 1:32 Me109E to appear from Dragon, but it is the first to cross my workbench. 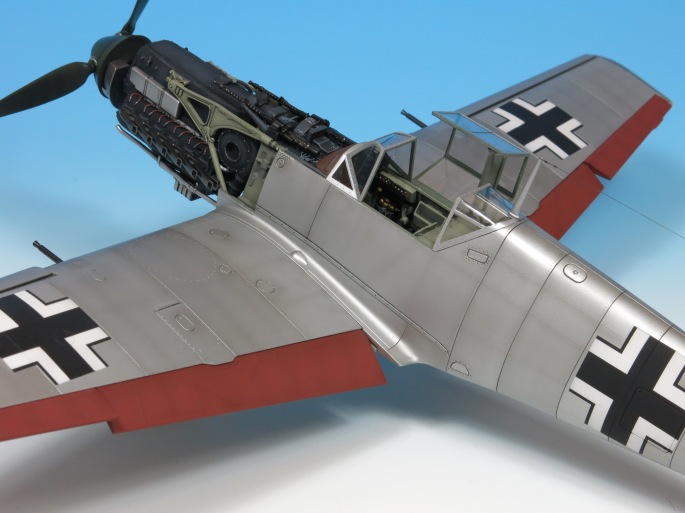 There are no shortage of Me109 kits, so when a new one arrives for review, it’s often tempting to leave well along, familiarity breeding a certain degree of contempt. When we received both the Trumpeter and Dragon kits within a few days of each other, it was decided to build them both for Model Airplane International and compare two kits from different companies and time periods, the early war Emil and late war Gustav, being too distinct to pass up! Having made the decision to build both kits and sent the Gustav to Mike Williams, how would I go about building mine and make it different from every other Emil ever built?
Last year I completed a 1:32 Bristol M1C fighter, finishing it as if unpainted, with areas of natural metal, fabric and wood and limited national markings. I loved the build and resulting model and so vowed to have a go at something similar when I got the chance. When the ‘109 arrived I was mindful of a Fw190 build by the talented Diego Quijano, who had finished his aircraft in natural metal with red-primer control surfaces. Being extremely impressed by this model, I decided to create something similar and so elected to finish my ‘109 in natural metal with painted control surfaces and rudder and then leave the cockpit and engine bay open, to show off the fine detail. Hopefully, this would create a model that was both different enough from the norm to create a memorable replica and interesting enough to take me a little out of my comfort zone.
Decision made, I could get to work.

In The Box
This is not the first 1:32 Me109E to appear from Dragon, but it is the first to cross my workbench. Initial impressions were very good; from the excellence of the mouldings, through the complexity of the fine detail and on to the options available from the box, everything appeared at first glance to be more than acceptable. Digging a little deeper and further highlights revealed themselves. I was particularly taken by the engine and cockpit sub-assemblies, the complexity of their construction and the detail once complete, being more than acceptable. Initially some thought was given to adding further detail, but that was dropped in favour of a carefully applied paint job: this model is more than acceptable from the box!
Though a 1:32 kit – and a Dragon one to boot! – there is very little here that will tax all but the most inexperienced. The breakdown of the airframe and smaller components follows logical lines and thanks to the quality of the components and a level of fit that’s a joy to behold, assembly is simple and straightforward. Working through the kit, it became apparent very early on that if a slightly different route was taken to that suggested in the instructions, areas such as the fuselage could be completed and painted before any internal sub-assemblies were glued in place, thus cutting down to almost nil the need for tricky masking. This was particularly useful as I was planning to have the cockpit open and engine completely on show – with no evidence of the kit’s upper and lower cowling panels – and that meant that sharp, perfectly defined areas of colour were a must.

Across the board, detail is fine and complex. The kit offers a complete DB601 engine, guns (fuselage and wing mounted), cockpit, weapons load, separate control surfaces and the option to open or close the canopy. Instructions guide you through assembly and though found wanting when it came to accurate colour call-outs for the smaller details (and camouflage as I later discovered!) these are well-drawn and easy to follow.
There are issues with the kit. The internal liners for the wheel wells are supplied in what looks to be Dragon’s DS plastic. These were deformed in the box and when I tried to straighten them out, they broke. I really wish Dragon have taken a leaf out of Tamiya’s Spitfire book and moulded these in plastic, the results being far easier to assemble and much neater to look at, once in place. The separate control surfaces are also a problem area – and one that pushes this kit up a skill level. Though the control surfaces are separately moulded in plastic, their hinges are supplied as tiny, individual etched metal pieces that need to be folded and glued together. Not only are they incredibly frustrating to assemble, they are extremely weak once in place! It would have been so much better to supply either alternative parts for either deflected or retracted surfaces, or plastic hinges that could be inserted into both the moving parts and their surrounding wing and tail surfaces. I liked this kit a lot – all bar these awful hinges!

Along with the parts needed to build the basic aircraft, you’ll also find alternative belly racks as well as bomb and drop-tank stores. These are nicely detailed, though I couldn’t work out how the bomb fixed in place, there seemingly being no hole for the pin moulded on the bomb to fit into under the pylon. Further investigation seemed to show that a hole needed to be opened, up but even now I’m not sure! Given that I was going for a clean look, the underwing stores were consigned to the spares’ box.

Along with the parts needed to build the basic aircraft, you’ll also find alternative belly racks as well as bomb and drop-tank stores

Decals are supplied for two rather generic German aircraft, both of which are finished in camouflage. It was only whilst writing this that I realised that Dragon’s instructions, though revealing a couple of colours, don’t actually tell you what paints to use to finish the model! Come on Dragon, your instructions really do need work! Anyway, the choices are as follows:

The decals are well printed and appear accurate in colour and detail. As with most modern kits, the sheet lacks swastikas, but as all of the markings were going to be sprayed anyway, this was not a problem. Should you decide to use decals, there are plenty of aftermarket options from which to choose… 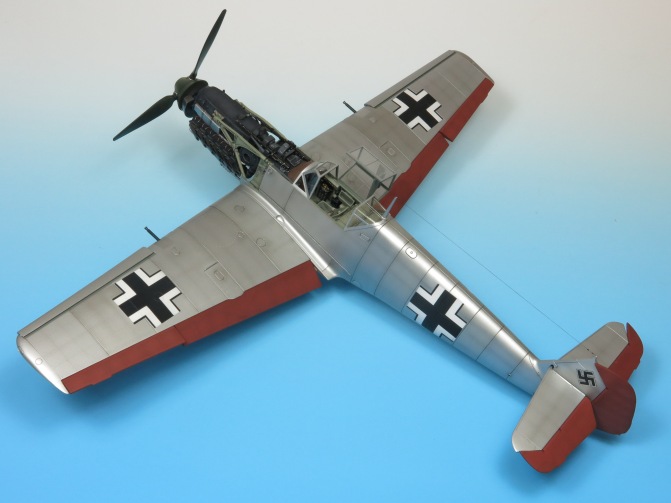