“Many will buy, build and enjoy the contents of this release and the resulting model with most certainly command attention within the display case.”

Having spent the thick end of 600 hours converting an Airfix 1:24 Harrier kit into a T.2 trainer during 2016, it will come as no surprise to anyone that I was rather excited by the idea of the same aircraft appearing as a readily available plastic kit in 1:48. Having already released kits of the Sea Harrier FA.2 and then the Sea Harrier FRS.1, I was keen to see what Kinetic would come up with when they attempted my favourite version, the T.2/4 – the fact that the company were being helped by many of the modellers that had helped me with my build, only added to the anticipation. As it turned out, the results would be on the whole everything that I could have wished for… Almost. 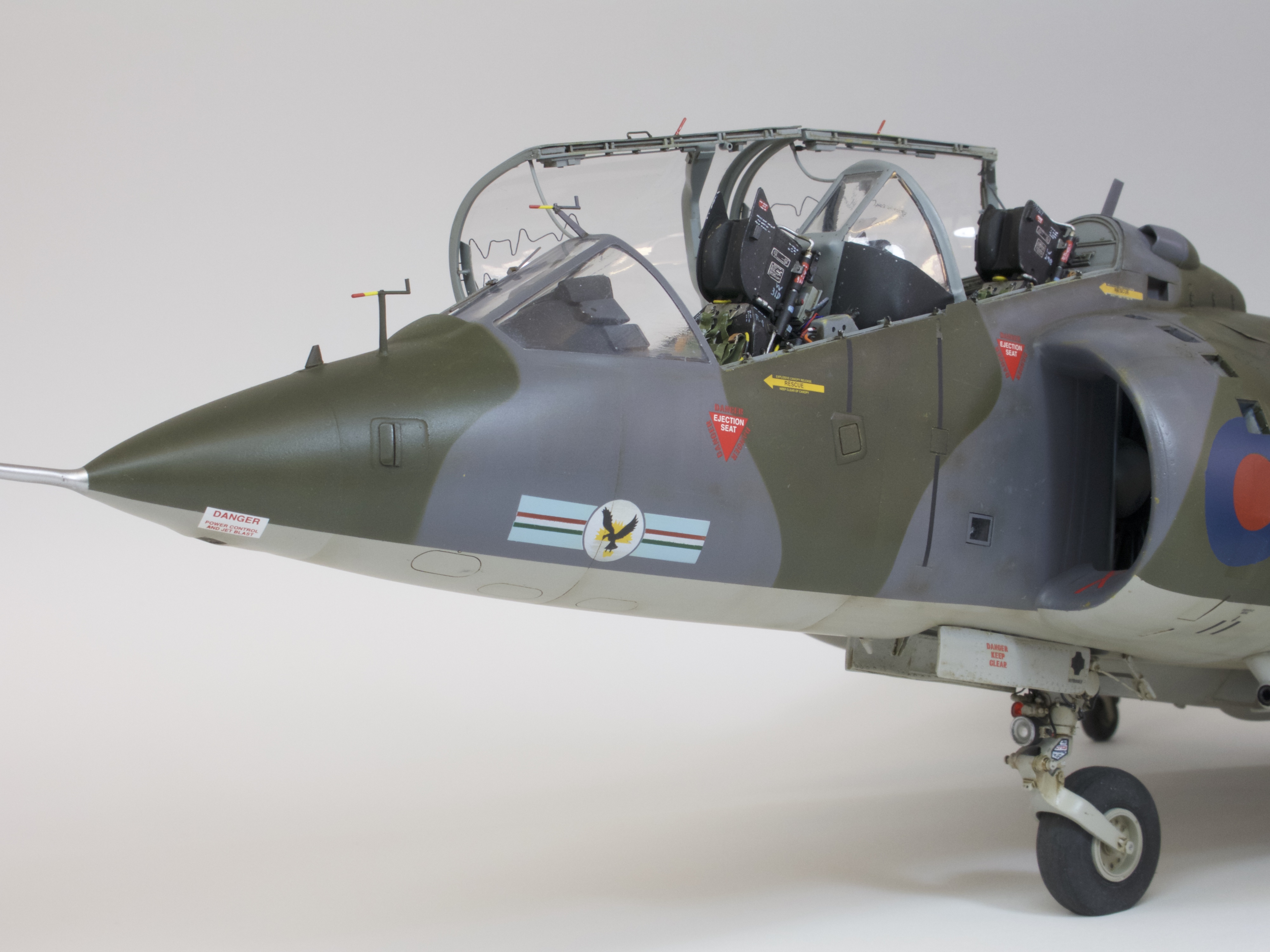 With this their third kit now on sale, it becomes immediately obvious that the company has learned from experience and improved each subsequent release within this family, the quality of the moulded parts, overall levels of finesse and the detail on offer, rising with each individual kit. Open the box and you are immediately captivated by the pale grey plastic parts and the quality of the surface detail that’s lovingly engraved onto each piece, the new, full-length fuselage halves being particularly impressive. And so it continues as you dig deeper…

So, what do we actually get in the box?
Kinetic has tried to be all things to all men with this kit and have as a result, only partially succeeded in their aim. The kit includes options to build the T.2/2A/T2N/4/4N and 8, a full set of decals being supplied to decorate your chosen aircraft. As a result of this, Kinetic has sensibly chosen to offer full-length fuselage halves that are then ‘modified’ with alternate nose and tail cones, fins and smaller details such as weapons. The kit includes three different fins, two shorter types, one with RWR and a third, taller option, as does it the two different tail and nosecones, pointed and laser. So far, so good.
Close examination of those specific parts reveals accurate shapes and detail and though the rear fuselage under the tail is not quite as subtly curved as it should be, only the most fastidious will notice. Wings and tailplanes are from the Sea Harrier kits and though these are not quite as sharp as the newer fuselage, will blend seamlessly with the fuselage when the time comes. 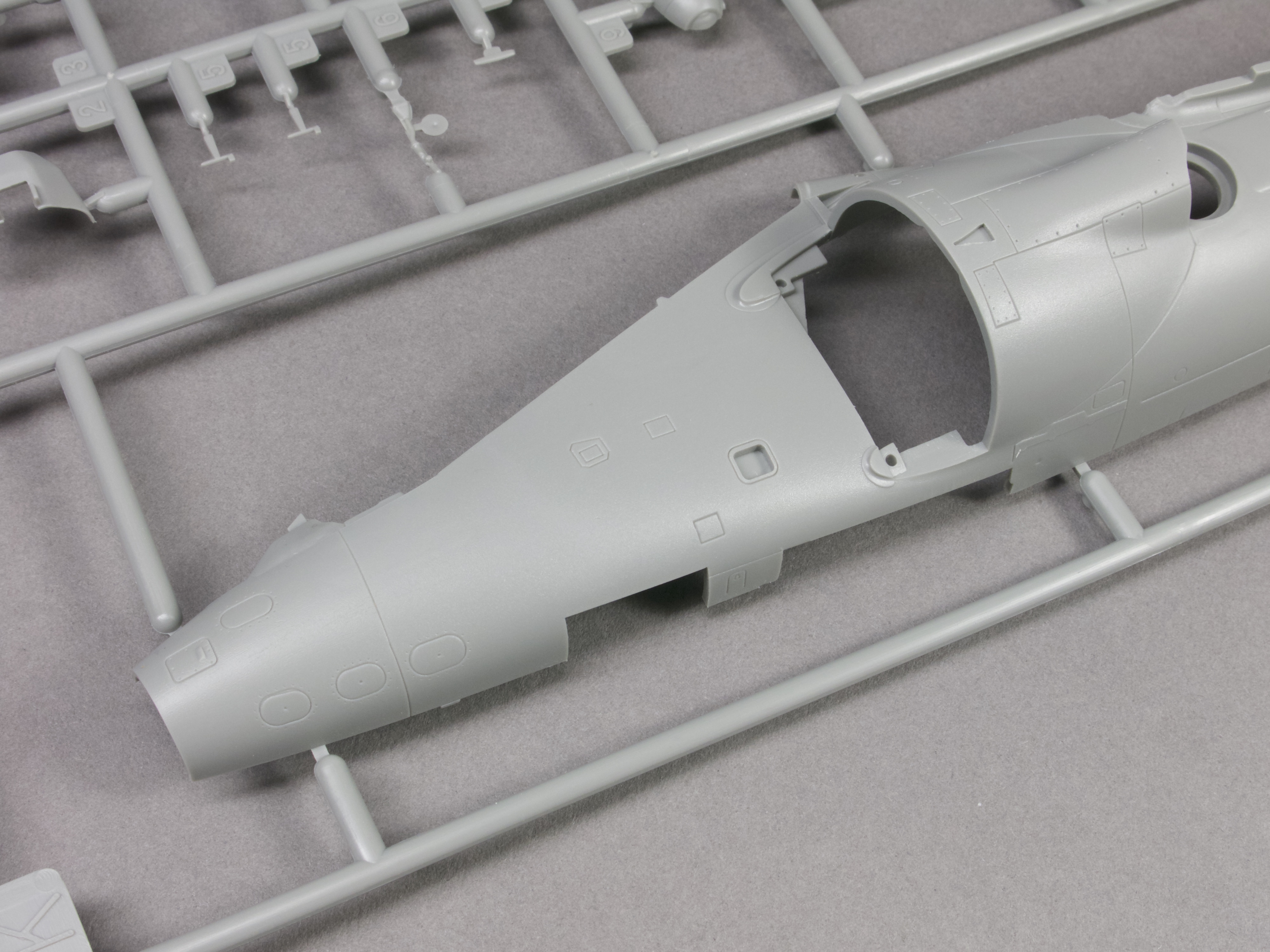 In terms of specific details and the smaller sub-assemblies, the kit is something of a mixed bag that although not exactly bad, is not quite perfect, either. We begin with the cockpit. Anyone who has peered into the real cockpit will know that it’s something of a Heath-Robinson affair, the rear ‘pit in particular being a slap-dash collection of parts that looks rather thrown together. Kinetic has somewhat tidied that impression up, supplying the rear cockpit in one piece with side consoles in situ, where no such consoles really exist. Similarly, it would appear that the instrument panels are a mixture of types, T2/4N/8, so you’ll need to research your build and modify the panels accordingly and for a truly realistic impression, then rebuild the back of the cockpit to remove those consoles before finally adding the missing detail as you see fit. Then we move on to the seats. RAF and Royal Navy trainers used Martin Baker Mk.9 seats, whereas American aircraft and those used by Thailand and Spain featured Stencel seats – only the former being included in the kit. This means that from the box, only the British jets can be built, the others requiring new seats to be sourced, the Kinetic/Wingman German Alpha Jet being a possible source of parts in this scale. 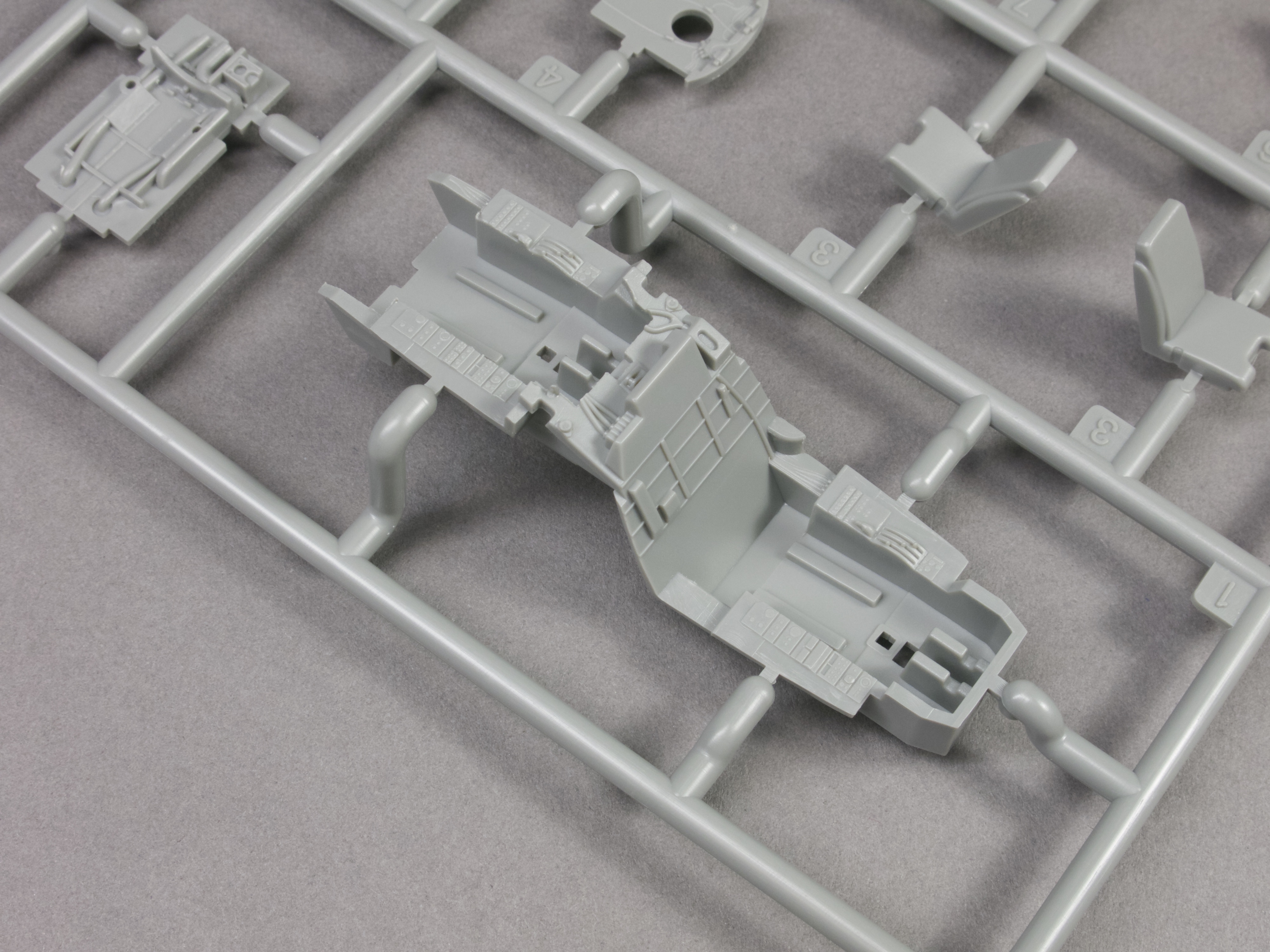 The second issue concerns the underwing stores. Using the Sea Harrier as its base, the kit includes both stores and pylons that are not really appropriate to this aircraft. To begin with, the inner pylons are supplied in their Sea Harrier guise with kinked leading edges, whereas those under the wings of the T-birds, had straight edges. The weapons are similarly problematic, with only tanks to decorate the pylons, items such as bombs, practice bomb dispensers and RAF SNEB pods, being noticeable by their absence and thus rather limiting the options (RN rocket pods are included, but they are not appropriate to this aircraft). There are two weapons sprues in the kit but the majority of parts are from the Sea Harriers so other than the drop-tanks, are superfluous to this build – mind you, if you have a one of the Sea Harriers lying around, you may have a spare 1000lb bomb that you could combine with the one in this kit, but that’s about it unless you wish to use items from the Airfix GR.3. It’s understandable that Kinetic has taken this route, but it does rather limit the possibilities and given that the items mentioned are hardly thick on the ground, alternatives will be difficult to come by…

Though there are some issues with this kit in terms of fine details and specific features pertinent to the versions offered on the decal sheet, as a package it scores very highly.

But enough of the criticisms, lets take a look at the positives, for there are many. Surface detail, already mentioned, is superb; the jet pipes, moulded in one part each are the best in any Harrier kit; the seats that are supplied are excellent, being the best depiction yet of the MB Mk.9 in this scale; the canopies, delicately etched with almost imperceptible MDC, are crystal clear and beautifully thin; tail fins are accurately shaped and highly detailed; undercarriage bays, front and rear, feature high levels of intricate structure and pipework that combine with the superb undercarriage legs and outriggers to once again produce the best recreation of these structures in miniature; the refuelling probe is a very useful addition and the little fret of etched details add a further layer of finesse, especially inside the cockpit. You see, I told you it was not all bad!
Along with the plastic parts, the kit includes a full set of clear, easy to follow instructions and a very fine decal sheet that includes options for the following aircraft:

The decal sheet is a real highlight of this kit, being clearly printed with accurate colour and register on show. Along with the larger markings, the sheet also includes a very comprehensive set of stencils that once again are the best I’ve yet seen in a Harrier kit. If this was an aftermarket decal sheet, you could expect to pay the thick end of £20 for it – it’s that good!

FINAL VERDICT
Though there are some issues with this kit in terms of fine details and specific features pertinent to the versions offered on the decal sheet, as a package it scores very highly. From the box the British aircraft will certainly look pleasing and though those who chose foreign operators will have to hunt for new seats, their results will also be pleasing. Comments that I have made certainly make it seem like there is a list of issues, but that’s likely to be — in this case — more the result of my obsession with the aircraft and the time I spent researching it for my larger build, than any really important foibles with the kit. Many will buy, build and enjoy the contents of this release and the resulting model with most certainly command attention within the display case. They will — much like I was — be excited to finally see a good kit of this aircraft and the way that it points to the single-seaters that will follow. If anyone had told me a few years ago that we would even see this kit I would have been shocked, now that it’s here and despite my comments, I’m delighted!
I’ve yet to start my build, but I hope to do that over the next month or so and when I do, I hope to deal with some of the points made. But first I have to decide on a version to model; maybe I should just recreate my 1:24 build? Maybe…

2 comments on “A HARRIER MADE FOR TWO”